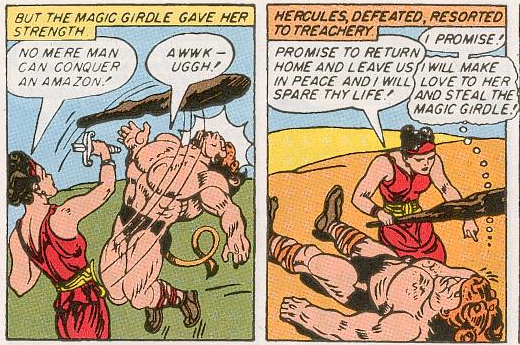 “The truth does seem to change according to who is looking for it — and why.”

In the pages of Wonder Woman, Marston took the story of Hercules’ Ninth Labor and turned it on its head, offering an alternate version, this time from the Amazons’ point of view. He constructed a cosmology for Wonder Woman’s universe that was particularly resonant in war-torn America, and endowed the Amazons with a divinely feminist backstory, creating a rich landscape for exploring his philosophies and psychological theories.

In Marston’s comic book mythology, two rival deities ruled the Earth — Mars (the Roman name for Ares), the god of war, and Aphrodite, the goddess of love.⁠1 In ancient times, Mars’s warriors killed off their more peaceful kin. Since these merciless killers were the ones who survived to reproduce, gentler qualities such as kindness and compassion were bred out of the species, resulting in a race of violent men bent on unchecked domination. Men became loveless savages who treated women like livestock and delighted in their enslavement.

To combat the brutality of Mars’s men, Aphrodite created the Amazons, a superior race of women. With her own hands, she sculpted the women from clay and breathed life into them, bestowing them with great beauty, insurmountable strength, and “the power of love,” which Marston regarded as the greatest power in the universe. To the Amazon Queen Hippolyte, Aphrodite bequeathed her own Magic Girdle, an artifact which rendered the entire tribe invincible as long as she wore it. The Amazons established an impenetrable city where women ruled, safe from men’s domination — at least until Zeus’s son came knocking.

In this version of the story, it was Mars’s influence instead of Hera’s that inspired the loincloth-clad strongman to attack the Amazons. Interestingly, Marston never mentioned Hercules’ divine parentage at all, but described him simply as “the strongest man in the world,” who promised to “take this Magic Girdle from Hippolyte — and bring her women back in chains!”

By ignoring Hercules’ paternity, Marston rendered him a symbol of unchecked human masculinity, with nothing godly about him. He was a mere mortal in Mars’s thrall, a description Marston later applied to Axis leaders Hitler, Mussolini, and Hirohito — all mortal men whose desire for power made them susceptible to the war god’s influence. Hippolyte and Hercules were the champions of Aphrodite and Mars, earthly agents of Love and War — each an archetypal representation of the potential of her/his gender.

Hercules arrived at the Amazons’ shore, wearing only a loincloth and the pelt of the Nemean Lion, its tail whipping behind. He looked like some kind of man-beast, wagging his gigantic wooden club at Hippolyte. The queen was not impressed – and she certainly didn’t strip down and hand him her precious treasure. Instead, she challenged him to single combat.

Fortified by the Magic Girdle, Hippolyte overpowered the muscleman. The panel depicting the winning blow is a sight, with motion lines connecting Hippolyte’s girdle with Hercules’ face, his head bent awkwardly backward. The queen knocked him completely off his feet, his tail curling beneath him. Gripping his mighty club firmly in her bare hand, the queen kneeled over the would-be conqueror, as he lay flat on his back, and demanded that he leave her people in peace in exchange for his life.

Defeated and humiliated, Hercules realized he had no chance against the queen in a fair fight, so he changed tactics. Feigning friendship, he invited the Amazons to a banquet where he finally sweet-talked Hippolyte out of her tunic. “Let me hold thy girdle, O’ Queen,” he begged on his knees. “Just to touch it will send my spirits soaring since thou hast worn it!” Just in case the scenario was too subtle for some readers, Marston put a micro-fine point on this exchange: “Hercules used woman’s own weapon against Queen Hippolyte. He made love to her!”⁠2

Hippolyte succumbed to Hercules’ seduction and allowed him to touch her prize, a decision she would immediately regret. What Hippolyte offered freely, Hercules snatched and abused. With the queen conquered, the Greeks attacked and enslaved the Amazons. In the panel depicting their defeat, Hercules held Hippolyte by the throat while an Amazon girl knelt behind her, a Greek soldier standing over her. He held the tip of his spear to the girl’s belly, thus driving home the not-so-subtle point — these women were at the men’s mercy in every way.

Fearing the women’s terrific strength, the Greeks shackled their prisoners with heavy chains. To keep them in line, the soldiers beat and “tormented” them. These chains would play a large part in the visual lexicon of Wonder Woman comics. They were not just physical; they were social and psychological — and they were the natural consequence of women entrusting men with power over their bodies and their lives. Marston’s feminist message was that a woman’s life lived under man’s domination was one of enslavement.

Ashamed and desperate, Hippolyte prayed to Aphrodite for assistance. Her prayers availed nothing at first, but eventually the goddess answered. Believing the Amazons had learned their lesson, Aphrodite gave them the strength to break their chains — on one condition: they must always wear their heavy fetters as a reminder of “the folly of submitting to men’s domination.”

Liberated by the Goddess of Love, the Amazons wielded their own chains as weapons, using them to beat back and choke their captors. After Hippolyte recovered the Magic Girdle, the women captured an enemy ship, sailing away from Man’s World, and out of recorded history, leaving Hercules and the Greeks to tell the world their face-saving version of the story.⁠2

1 Why Marston chose to use the Greek name for Aphrodite and the Roman name for Mars, as opposed to sticking to a single pantheon, remains a mystery to me. My best guess is that “Mars” was simply more widely recognized in the 1940s.

2 This entire story took up only three pages of a comic book. Marston’s storytelling density and efficiency could be staggering, and was compounded by H.G. Peter’s artwork. 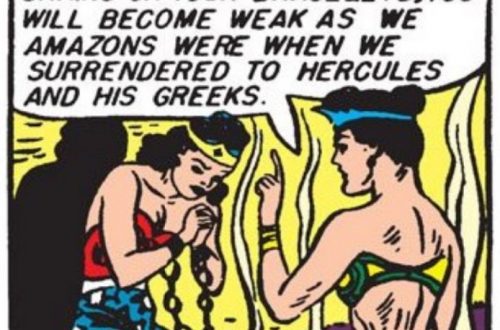 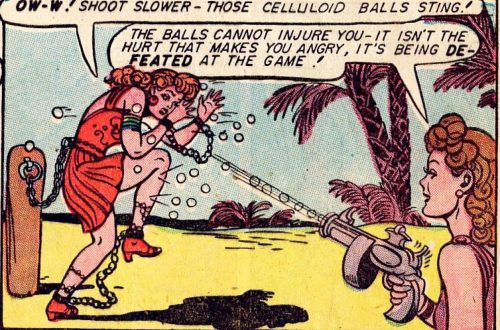 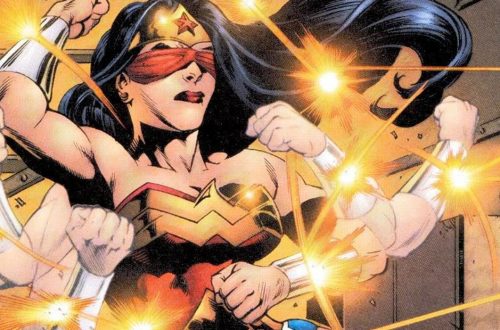