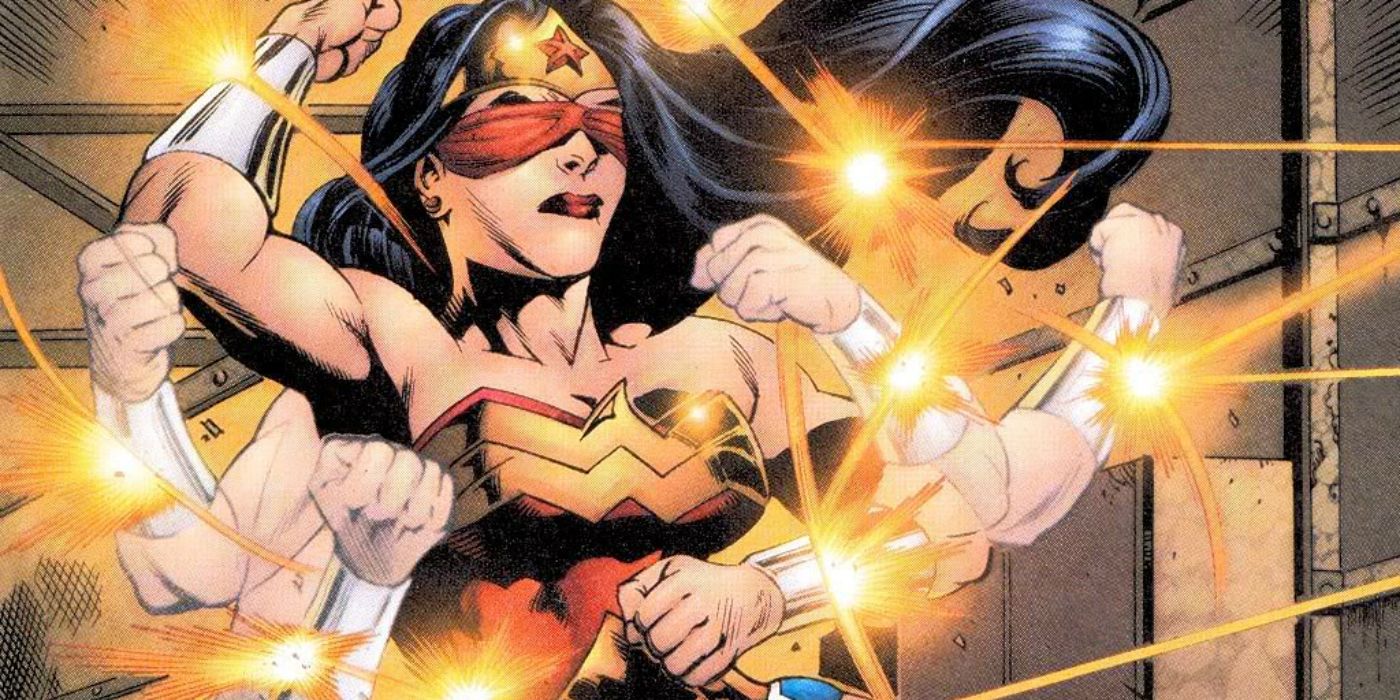 Centuries after the Amazons landed on Paradise Island, Diana was born. On her fifteenth birthday, she pledged herself to Aphrodite’s service and received her Bracelets of Submission, made from the indestructible metal, Amazonium, found only on Paradise Island. It seems safe to infer that the Amazons have all adopted such ceremonial bracelets made from this mighty metal by the time Diana dons her own, as they all enjoy their protective power.

Before leaving Paradise Island to become Wonder Woman, Princess Diana had to prove herself the strongest and wisest Amazon by winning an Olympics-style tournament. In the final event, Bullets and Bracelets, two finalists took turns firing guns at one another, each deflecting the other’s bullets with her bracelets.

Apparently, somewhere in their immortal history, these women decided that this would be a fun way to pass the time. I guess they felt a game of catch was just too basic.

Whatever the game’s origin, the death-defying contest of speed and reflex would come in handy in Man’s World, where men were continually asserting their masculinity by pointing their guns at one another — and at Wonder Woman. No sooner did Diana arrive in Man’s World than she found herself confronting an armed gang of robbers.

Facing down the bandits who aimed to kill her, she mused to herself, “It’s fun to be playing Bullets and Bracelets again!” Then she tossed one thug into the others, knocking them over like milk bottles at a carnival. What was deadly to ordinary mortals was fun and games to her.

Turning the robbers over to the cops, she fled the scene but was followed by an opportunistic theatrical agent who saw Bullets and Bracelets as a vaudeville goldmine. In need of money, Wonder Woman agreed to perform the act on stage, where her beauty and athleticism garnered her not only an income but a lot of press, making her instantly famous.

Now, let’s take just a minute here to consider this scenario. It’s a stage performance in which men fire live ammunition at a beautiful, nearly-naked woman while audiences pay to watch. Sure, it’s all fun and games for Diana, but the whole idea is pretty creepy.

In the 1970s television adaptation of this story, the audience roots for an older woman, who wants to use an automatic machine gun. Wonder Woman catches every bullet, but the mob mentality sides with the phallic death machine instead of the woman’s welfare. (Not that Diana needs such protection.)

In that same version, a male attendee appears visibly frustrated that Wonder Woman is unimpressed by two shots from his pistol, not just surprised, but irritated and annoyed that he was unable to penetrate her flesh. How dare she not simply die for him?!

Since moving to America, Diana has rarely gone long without practice. Nazis, supervillains, and common criminals all line up to test her skill, each wanting to be the one to catch her with her guard down and penetrate her defenses.