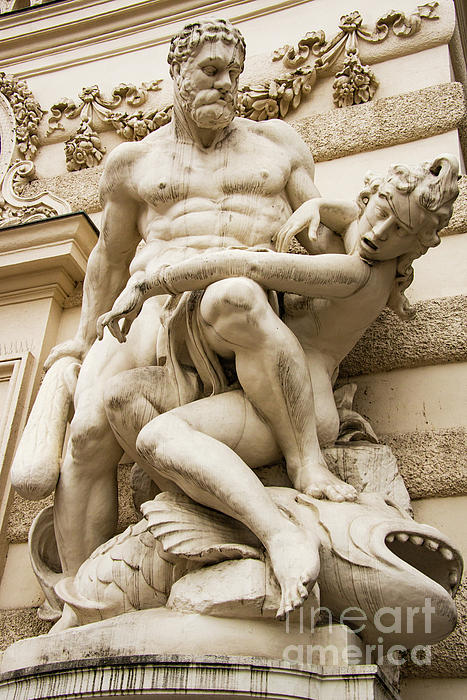 “It seemed from a psychological angle that the comics’ worst offense was their blood-curdling masculinity.”

Wonder Woman’s real-world origin begins in World War II America, but elements of her backstory can be traced to ancient Greek tales of the mighty hero, Hercules. Famous for his incredible strength, Hercules was the son of Zeus, king of the gods, and the mortal Alcmene. Alcmene had caught the wandering eye of the thunder god, who was fundamentally incapable of keeping his royal scepter in his toga.

Hera, Zeus’s wife (and also his sister, because Greek mythology), dedicated a significant portion of her immortal existence to making life miserable for her husband’s extramarital offspring, who served as living reminders of his infidelity. Aggrieved by Hercules’ very existence, she repeatedly attempted to end it.

While he was just a wee babe, the jealous goddess sent serpents to strangle him in his crib. But baby Hercules was stronger than he looked, and he crushed the snakes with his bare hands. Despite Hera’s best efforts, Hercules survived to adulthood, married the mortal woman Megara, and sired six children.

Finding the prospect of a happily married Hercules unacceptable, Hera cursed him with insanity, driving him to murder his wife and sons. When his faculties returned, Hercules was grief-stricken. To atone for his sin, he entered the service of King Eurystheus of Mycenae, one of Hera’s favored mortals. Eurystheus commanded Hercules to complete his famous Twelve Labors, the ninth of which was to capture the girdle of the Amazon Queen Hippolyte, the symbol of Amazon might, which had been a gift from her father Ares, the god of war.

As the story goes, Hercules set sail on his quest with an army of Greek warriors. Upon his arrival at the Amazon nation of Themyscira, the Greeks found a friendly greeting. Impressed by the mighty hero, Hippolyte offered her girdle to him freely. Of course, this is Greek mythology, so nothing could really be that easy for the bastard, at least not as long as the eternally vindictive Hera had anything to say about it.

Disguised as an Amazon, Hera spread a rumor among the tribe that Hercules intended to kidnap their queen. To protect Hippolyte, the Amazon army attacked the Greeks. As the warrior women descended upon the Greek ships, Hercules seized Hippolyte’s girdle as he ran her through with his sword, then tossed her lifeless body aside. The Greeks waged a great battle against the Amazons before sailing off with their prize.